The Biggest Ski Areas in Europe

Grab your skis, book your instructor, buy the ski pass, and head for the slopes...but wait, don’t forget your passport. Why? Because the ski areas we’re about to show you are so big you can even end up in another country.

This week we’ll be taking a look into the biggest ski areas in Europe, how many kilometers of slopes they have, what countries they cover, and other interesting facts about each one. This way when you start thinking about your 2021/2022 vacation you might even consider covering two countries in just one trip, and without having to change hotels...isn’t that the dream. 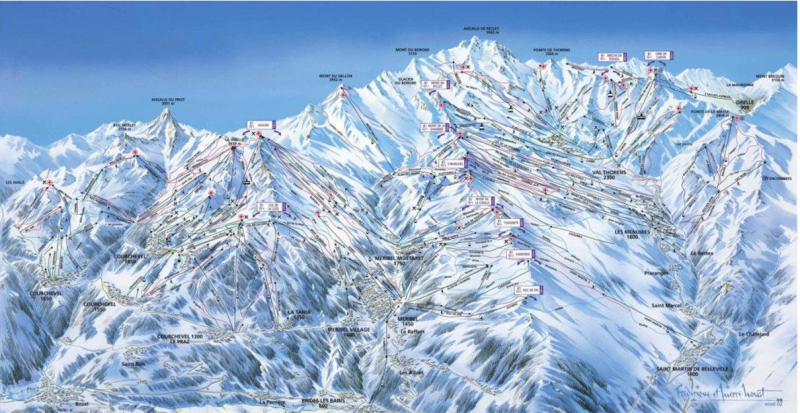 What’s exciting is that you can buy a ski pass for the whole area and reach any other ski resort thanks to the 180 ski lifts operating in all of Les Trois Vallèes. Don’t worry about your ski experience because you can find 43 slopes for extreme beginners (green), 138 slopes are for beginners/easy (blue), 119 for intermediates (red), 33 are considered difficult (black), and plenty of off-piste if you’re looking for a little adventure. This means that even if you go with a large group of people, everyone will be able to find the right piste for them.

If you’re not into skiing one day or you want to try another sport, Les Trois Vallèes also has 120km of cross-country skiing trails which will take you to the most magical places around the resorts and it will give you a break from non-stop skiing because let’s face it, with 600km of pistes you’ll have no time to stop.

Being the biggest ski area, it is no surprise that we have over 200 independent ski and snowboard instructors operating there. All the instructors are extremely familiar with all of Les Trois Vallèes and they are great guides when it comes to showing you around because 600km of pistes can get a little overwhelming.

If you’re wondering, how many hours with an instructor it would take to get to know the area, let’s just say you could ski in Les Trois Vallèes for a whole week and you still wouldn’t go down the same slope twice. This is why it’s definitely worth having an instructor with you for at least 4 hours per day to show you around and teach you the right techniques for the different runs. 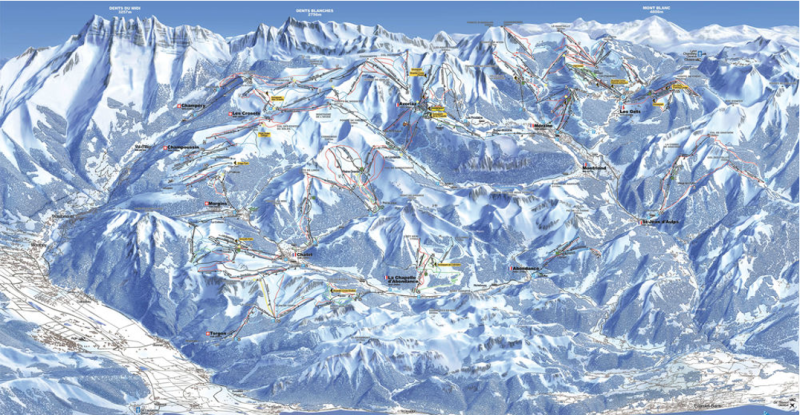 This one is tricky because in total this ski area has 650km of pistes which would indeed make it larger than the proclaimed biggest ski area in the world “Les Trois Vallèes”. But it must be said that although there are indeed 650km of pistes available, they are not all fully interconnected. There are some points in which skiers/snowboarders would have to get in cars or busses in order to reach other areas and to many people that is a deal-breaker for it to claim the position of the biggest ski area in the world.

Officially there are 426km of interlinked pistes for all level skiers/snowboarders. You will find 37 pistes for beginners (green), 123 easy pistes (blue), 110 for intermediates (red), and 30 difficult pistes (black). The ski area connects a grand total of 13 ski resorts in two different countries, France and Switzerland:

No doubt you’ll have plenty of choices of places where to stay, whether you are looking for something quiet and relaxed or some good nightlife and plenty of activities for when you’re done skiing/snowboarding. If you ever wanted to be in two places at once, just ski to the border, place one foot on the French side, one on the Swiss side and there you go! You will be in both France and Switzerland at the same time.

With such a big ski area you will definitely need help navigating it, even if you are an experienced skier/snowboarder.  It can take you several days to see all of it and it’s always better to have someone with you who knows it well just to make sure you end up in the right country at the end of the day. We recommend 3 hours a day with an instructor for long vacations and full days with an instructor for shorter vacations.

On the Maison Sport platform, there are over 50 independent instructors working in the 12 ski resorts that have access to Les Portes du Soleil, just look for the ski resort where you’ll be staying and book the instructor that’s right for you.

Over a decade ago a double-decker cable car was put into place to connect the famous ski resorts La Plagne and Les Arcs, transforming it into one of the top 5 largest ski areas in the world. Covering 450km of slopes, in the Paradiski ski area, you will find 238 slopes, 153km of cross-country skiing trails, 4 snowparks, and 2 halfpipes, just in case you want to practice your tricks.

Although the two major ski resorts it covers are La Plagne and Les Arcs, the vast ski area also reaches the smaller resorts around the two big ones, giving you plenty of places to explore:

This ski area is excellent for beginners since it has 152 beginner runs (green/blue), which means if it’s your first time skiing or snowboarding you will still have plenty of slopes to have fun on, which is usually not the case in many resorts. In addition to the beginner runs there are also 79 intermediate runs (red), and 22 expert runs (black), so if you’re traveling with others that have more experience, they will have plenty to do as well.

With so many beginner slopes it is no surprise it’s such a popular place for first-time skiers and we have over 20 independent instructors ready to take you skiing, snowboarding, and exploring for the first time. Make sure to book them in advance since the season does get quite busy. If you want to explore the whole area, we recommend at least a 4-day vacation with no less than 3 hours a day with an instructor. 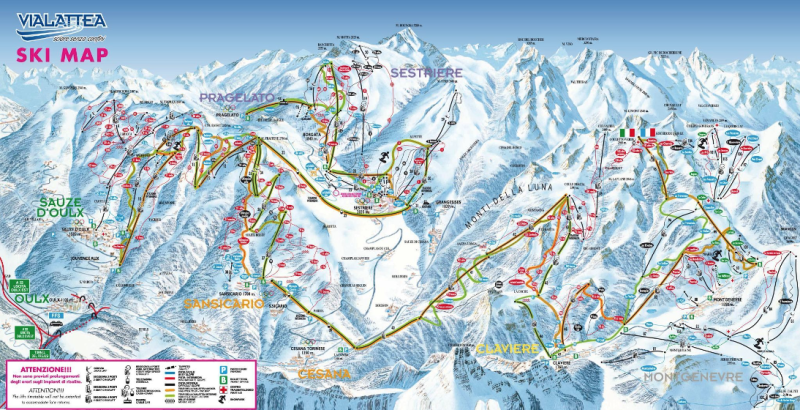 Next on our list is La Vialattea, “The Milky Way”, also accessible from two different countries, France and Italy. This ski area has 400km of ski pistes, for a total of 249 groomed slopes, of which 7 are for beginners (green), 80 are easy (blue), 120 are for intermediate (red), and 42 are difficult (black), all accessible through 70 ski lifts.

There are 6 resorts with access to la Vialattea five of which in Italy and one in France:

In 2006 the Italian side of the ski area was the host of the Winter Olympics and thanks to the investment brought by that event, major improvements were made to ski lifts and the interconnection of the ski area, making it possible now to ski from one side of the mountain to the other within the day. This means that wherever you are staying, you won’t miss out on what each unique resort has to offer if you wish to see it. 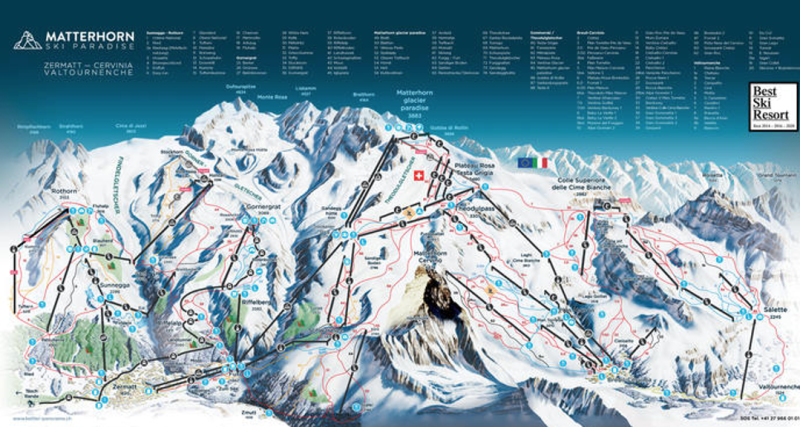 The area covers 360km with pistes for all-level skiers and snowboarders. It’s made up of 74km of blue runs for beginners, 227km of red runs, 20km of black runs, and an additional 36km of yellow freeride trails making up 148 pistes interconnected with 52 ski lifts.

It’s also worth mentioning that this ski area is home to Europe’s highest lifts and the world’s second-biggest lift-served vertical drop (2,379m), and 20km descent down to Valtournenche. In order to see all the incredible views and runs of the Matterhorn Ski Paradise, we recommend booking 4 or more hours with an instructor who will know which runs to take you on and how to get back to your starting point. We have over 30 instructors available in the area ready to take you on all over, from Switzerland to Italy and back.

You’re all set and ready to head over to the biggest ski areas out there, get ready to ski in and out of countries like a true jetsetter. Remember since these areas are so big it is always better to have someone with you who knows them, especially if it's your first time there.

With over 1,000 instructors on our platform, we’re sure you’ll find the right one for you and your family or friends, all you have to do is hop on the platform, select your resort, book your instructor, and get excited.

The Maison Sport Instructors Are Waiting for You.